The Jamion can be used in numerous ways:

Discover some mapping examples projected with the JAMION: whether to enhance an image, a location, to reach an audience, share a story, promote creativity and innovation or to stand out. 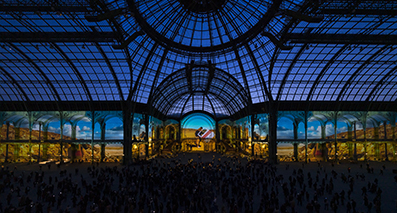 A monumental projection in the Nave of the Grand Palais. The content created by the director for the occasion is projected on a surface of 13,500 m² with 3 jamions enhancing the artists’s work and the architecture of the Nave. 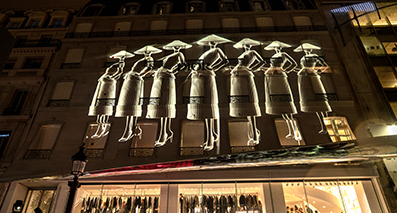 Inaugurating the Dior boutique on the Champs-Elysées

Honouring the symbols of the Maison Dior, through a projection mapping on the façade of the new boutique. 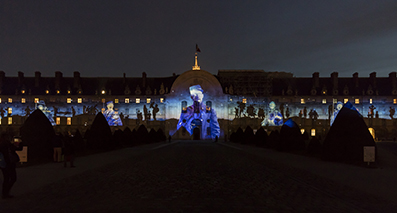 A projection mapping with 2 jamions to commemorate the centenary of the end of the First World War. 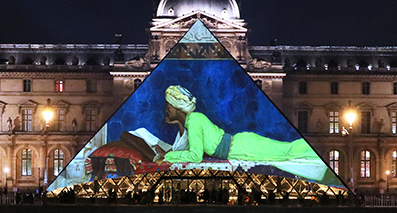 Inauguration of the Louvre Abu Dhabi

A monumental projection on the glass walls of the Louvre pyramid in Paris, representing a selection of art pieces of the newly opened Emirati museum. 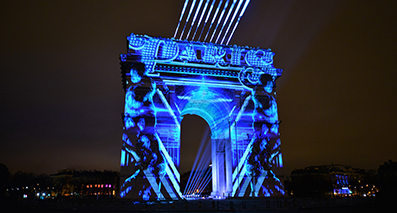 A light show projected on the Arc de Triomphe with 3 jamions. 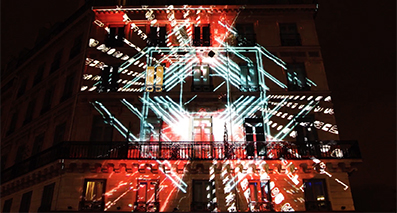 As part of an evening celebrating the brand’s technological prowess, Lenovo chooses a projection mapping using innovative technology, the JAMION. 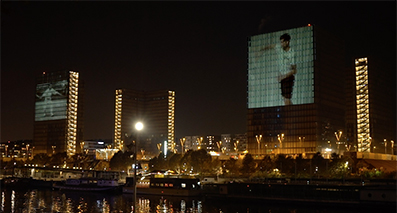 Through the magic of projection, Djokovic and René Lacoste hit a few balls on the two towers of the BnF. This is made possible by 2 jamions installed on the opposite shore. Projection distance: 250 metres. 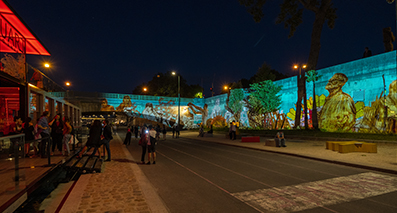 Monumental projection on the banks of the Seine, to accompany the launch of this plural artistic place. Opening of the exhibition “Time Capsule by Swoon”. 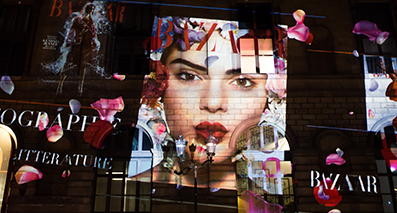 To celebrate the first fashion Gala and the opening of the exhibition “Harpers’ Bazaar, First Fashion Magazine”, the MAD welcomes special guests with a projection mapping. 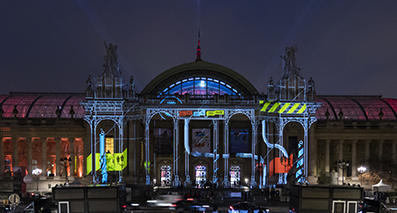 The Grand Palais transformed into an extraordinary factory

The facade of the Grand Palais is transformed into a modern factory thanks to the JAMION, a high-tech projection mapping solution of French design. 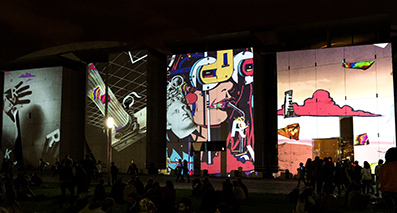 Artistic performance for the Nuit Blanche

JAMION is a tool for artists of all disciplines to express themselves. The facades of the Cité de la Musique in Paris comes to life for an evening. 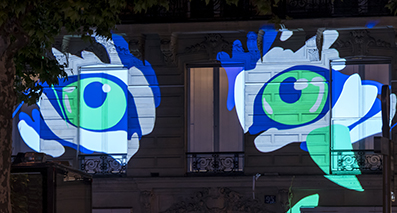 Lacoste generates awareness for endangered species with a narrative mapping on its boutique on the Champs-Élysées. The location requires the usage of a projection device adapted to the constraints of public places and roads. 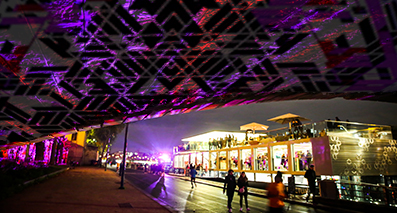 Street-artists LEK & SOWAT take over the banks of the Seine with a digital street art performance projected with the JAMION. 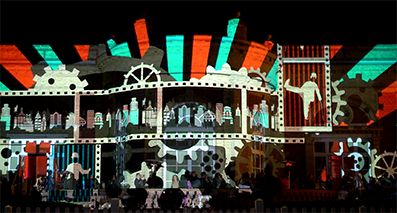 Tribute to the 7th art with a projection mapping on the façade of the Villa Le Cercle. 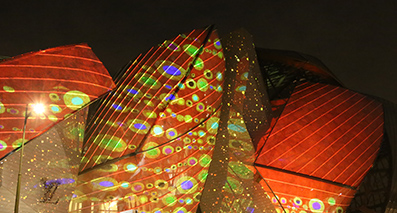 For the closing of the exhibition “Être moderne, le MoMA à Paris”, the Fondation Louis Vuitton marks the event. The JAMION is used to project pieces of art displayed within its walls onto the glass sails of the museum. 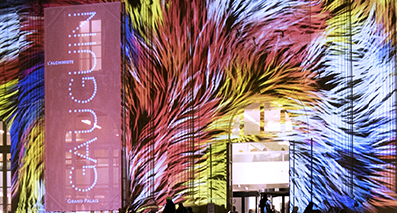 Projection mapping on the façade of the Grand Palais as part of the exhibition dedicated to the artist. Putting the spotlight on the entrance of the exhibition is an element of attractiveness for all to see and has direct impact on the number of visitors. 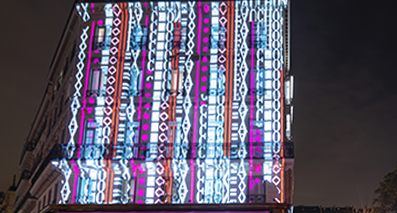 To celebrate, to create attention, to delight the senses, to dare to make a difference. With this projection, Fauchon extends its brand experience and catches the public. 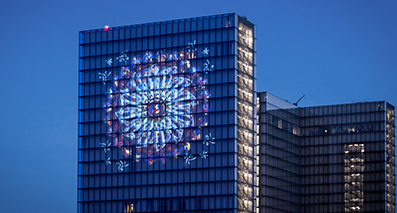 Opening night of the BnF festival

Monumental projection based on iconography provided by the BnF. A projection set up composed of 2 jamions installed on the opposite shore. Projection distance of 250 metres. 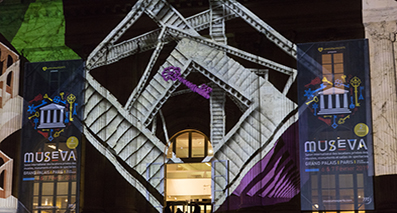 The Grand Palais welcomes over 70 cultural venues for the Museva trade fair. A projection mapping to trigger the interest of the public and raise awareness around the event. 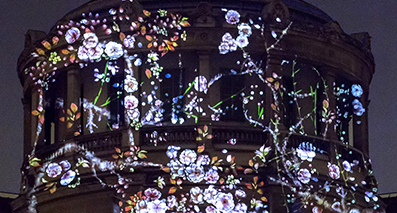 Putting the spotlight on the treasures of Imperial Japan. An incentive to come inside and discover the exhibition in the Musée Guimet. 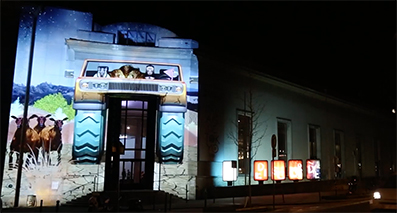 The artist Bertrand Dezoteux experiences new digital forms. The JAMION becomes a tool of creative expression to stage the artist’s works projected outside the walls of the museum. 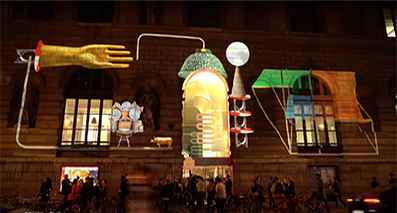 Opening of the new design trail and the Gio Ponti exhibition

A tribute to the designer and a phantasmagoria on the façade of the museum through a projection mapping. An off-site event on rue de Rivoli, with a jamion, a device adapted to the constraints of public places and roads. 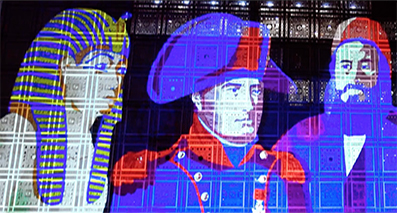 The history of the Suez Canal projected on the unique façade of the Arab World Institute. The Jamion easily adapts to all types of architecture. 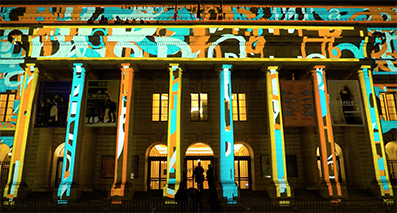 Launch of the theatre season

Celebrating the launch of the saison and telling the story of the theatre’s new visual identity through a projection mapping with 2 jamions. 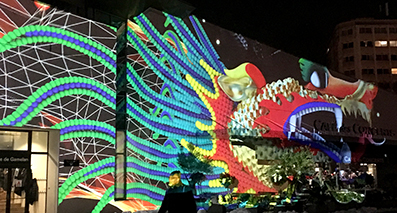 To celebrate the Chinese New Year, the Philharmonie de Paris displays a colourful and exotic projection the time of an evening.